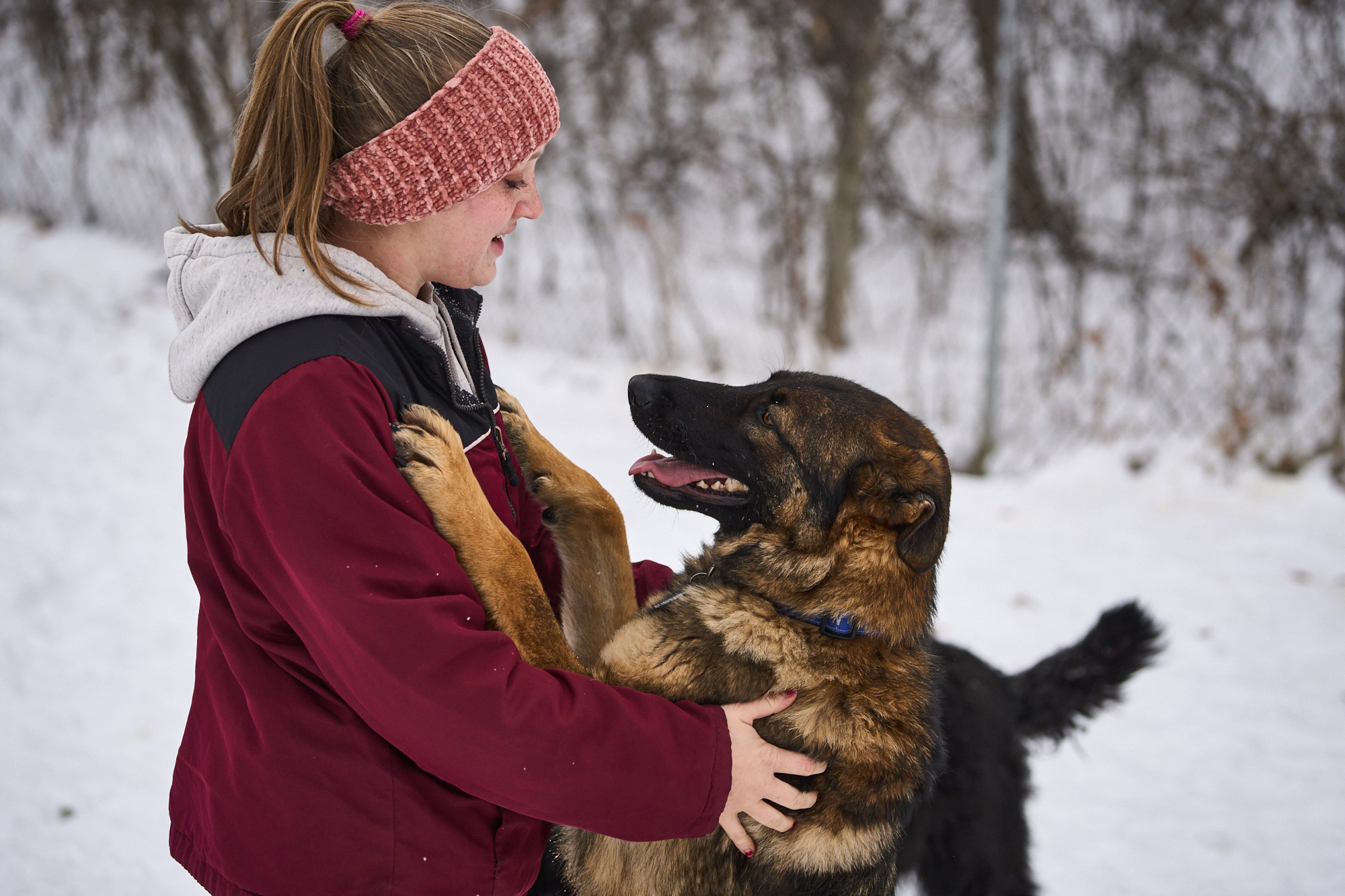 Above: HFL staff Barbara with Johnjohn a pup who came to us from the Animal Humane Society.

Introducing Jimmy and JohnJohn, two German Shepherd pups, about 6 months old, small for their age, recently arrived at Home for Life. They were surrendered with their littermates to a local shelter but were very thin and unsocialized. The shelter placed them in foster homes and supported the fosters with many resources including training and behavioral coaching.

We first learned of these special puppies from an employee of a pet food store that donates much to Home for Life. She had been fostering one of the puppies- we never found out which one- and was in tears when she brought him back to the shelter after more than a month- worried for his fate and that of his siblings due to their extreme anxiety and fear which had not turned around despite the opportunity to be in a home setting. The behavior was similar in all the puppies - extreme anxiety, aggressive posturing, alarm barking, stranger aggression, hyper-alertness nearly round the clock, and becoming so afraid when approached that they would urinate and defecate on themselves. After the pet food store foster contacted us we reached out to the shelter to offer our help if they thought Home for Life would be an alternative for any of them.

The shelter thought long and hard about the welfare and future of these puppies and all alternatives available including other rescue programs. With every resource available from individual fostering, and veterinary care to behavior and training experts the puppies had not been able to cross the threshold to be considered for placement in a conventional home. Although the shelter staff had poured their hearts into trying to turn the puppies around, some of them had such significant behavior and medical issues that euthanasia was thought to be the most humane alternative for them. Everyone was heartbroken to feel there was no alternative but to end the lives of these young puppies.

That left the only two puppies remaining, the brothers Jimmy and JohnJohn who was called Vision at the shelter. After extensive discussion with the shelter, about what had been done to help the puppies, and what was likely to be the outcome in adoption programs with comparable support that had already been tried, the decision was made to transfer them to Home for Life sanctuary where it was hoped that they might have a chance for happiness and equilibrium. The shelter staff feared that they would be serving these puppies poorly by putting them, repeatedly, into situations that were not aligned with their nature. They hoped that if given the permission to be themselves and the space to simply choose not to engage in a situation, they would have a chance for a fulfilling and happy life. The shelter staff thought about and discussed what would be best for Jimmy and JohnJohn and tried to explore and consider all their options. They came to the decision that a Sanctuary lifestyle without the demands and expectations of a typical companion pet will allow them the best option to live a quality life with a sense of security and contentment

They were cute and attracted attention but they would not stay puppies forever and then what? They had already been in shelter care, foster care and struggled terribly. The worse thing possible for them would be for them to get on the merry-go-round of multiple placements, being passed around, when one home after another didn't work out and getting in a situation that would lead to their ending up like their brothers and sisters.

A sanctuary isn't right for every dog but can be a salvation for animals like these that have not thrived in shelters, foster homes, or rescue programs, We are not miracle workers at Home for Life but we offer attributes that most homes or rescue programs can not. Space and time, the companionship of other animals allows anxious and fearful dogs to build confidence through observation and simply absorbing the ambiance, and a serene if sometimes noisy environment. Dogs and even puppies know when their footing is unstable and the ground is shifting under them because they are in transition. It is more than some can handle and especially when the transitions become serial. Just like plants, animals need homeostasis to thrive. A home for life. As the Poet Maya Angelou wrote, “the ache for home lives in all of us, the safe place where we can go where we are not questioned." We believe that the longing for a place to belong, a home, exists in animals too. Our animals feel that they are home and that makes all the difference.