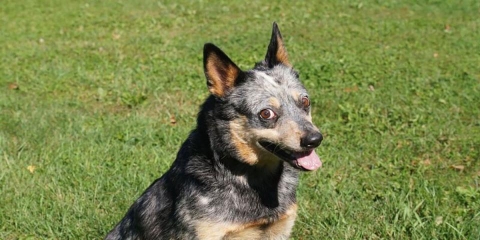 Raha, our new dog from Vafa Animal Shelter, who survived having firecrackers taped in his mouth, has pretty much monopolized our social media recently, and rightfully so! But we have a lot of news to share, and we want to start with one of our Texas connections, the Australian Cattle dog Outlaw, who came to Home for Life near death, blind, diabetic and suffering from EPI (endoctrine pancreatic disorder) on Labor Day 2016, just about a year ago. He originally came from Mesquite Texas, a suburb of Dallas. FYI Dallas is about 250 miles north of Houston - about the distance of Madison Wisconsin to the Twin Cities, Minneapolis-St Paul, Minnesota.

Outlaw had had NINE( 9) homes by the age of 5 before coming to Home for Life. How did this smart, handsome and good dog end up homeless, blind and near death despite being adopted out so many times? Read Outlaw's story here: http://homeforlifesanctuary.blogspot.com/…/why-sanctuary.ht…

Blindness can occur very rapidly in dogs with uncontrolled diabetes who develop cataracts over their eyes, a side effect of the high blood sugars. We always knew we wanted to do surgery on Outlaw eventually to correct the blindness and remove the cataracts. But we spent many months working to put weight back on his emaciated frame and stabilizing his blood sugars - it proved difficult due to the EPI.  But our dedication to helping Outlaw and giving him a better life paid off, and we felt confident enough about his condition by this late summer to schedule Outlaw for his eye surgery. Thanks to the incredible generosity of Home for Life's supporters, we were  able to pay for Outlaw's cataract surgery, which occurred last month, in mid August 2017, with Dr. Roberty LaRocca of Animal Eye Specialty Clinic (the best!).

Home for Life's Spring Match Campaign, which ran from June 4 through July 10 raised $129,250.25 to help Home for Life's animals like Outlaw, who need the care only a sanctuary can provide. After his long, long journey - losing his original home when his master was diagnosed with cancer and heart failure, through 9 adoptions, the loss of his sight, facing near death, Outlaw finds himself a short year later, happy, healthy and able to see once again! It was such a joyous moment for all of us at Home for Life when, for the first time, Outlaw could see the HFL staff who have taken care of him for the last year and worked so hard to restore his health and happiness. We thank all our donors who so generously contributed to our Spring Match drive to make miracles possible for animals like Outlaw.

When Hurricane Katrina and then Hurricane Rita pummeled Louisiana and Texas in the mid-2000s, many Minnesota animal rescues and welfare organizations marshalled resources and personnel and hurried to these states to do what they could to help. Back then, as now, Home for Life asked ourselves what the role of a sanctuary should be in these crisis situations? Emotionally, we feel compelled to DO something IMMEDIATELY for the animals as well as the many people in these desperate circumstances. In rescue, it is easy to get almost addicted to crisis response and the adrenaline rush it produces. But back with Katrina and Rita, there were so many groups who had rushed down south from across the country to participate in hurricane rescue efforts, that joining them did not seem to be the way to focus our energies and make the best use of what we could do to help. Before long, it became clear how Home for Life could best assist. Many displaced dogs and cats were brought back North to try their luck to find a new home after losing their families in the chaos and turmoil - dogs like Sheila.

Sheila was part of a Second Wave of animals from Hurricanes Katrina and Rita who needed help even as the immediate situation subsided. The Animal Humane Society here in Minnesota had brought Sheila back with them from their assistance efforts in Texas after Hurricane Rita, an undertaking spearheaded by their visionary, late Executive Director Martha McPhee. After Ms. McPhee's passing, not long after their return from Texas, Sheila was still in the AHS shelters, but struggling to find an adoptive home. Because of how much the Hurricane Rita rescue had meant to McPhee, the AHS asked Home for Life to accept Sheila at our sanctuary - ensuring that all the animals they had brought back from Texas would find a safe landing. Sheila is still at Home for Life over 10 years later! Read her story here: http://www.homeforlife.org/pet-profiles/sheila

We know that there will be many dogs and cats like Sheila, lost souls who are missing their former owners and homes and for whom recycling through new adoption placements may not be the answer. As Sheila did more than 10 years ago, the Second Wave of these dogs and cats will need a Home for Life, and we will be ready to help them when that time comes.