In the early summer of 2014, yet another posting came across Home for Life's email. We receive so many of these messages from all over the country; the pleas are always urgent and accompanied with photos. We can't take all the animals that need help, but we read every message and look at every dog's and cat's photo. Even if they can't all be saved, at least someone will bear witness that they mattered and were seen. No mater how many we help at Home for Life, it's always the ones we can't take in whose faces haunt us.

Many of the animals, especially the dogs, do end up getting saved in the nick of time. We frequently receive numerous, frantic pleas from people from around the United States, cross posting far and wide on behalf of a special case. When we have finally responded, we often find out the dog was already rescued and safe. There are now so many rescue groups doing adoptions that have sprung up in the last few years that most animals do find a second chance to find a new home and start a new life.  After several of these outcomes, we still reviewed the emails, but didn't often reply with an offer to help or really worry that the dog or cat would fail to find a safe haven.

So when we received the posting with a  plea for help on behalf of Rocket, his story caught our eye, mostly because he was a black, mixed-breed dog who had seizures. Home for Life has cared for many dogs with epilepsy; they have been surrendered to the sanctuary because dogs with seizures have a hard time finding an adoptive home with this condition or keeping their home once diagnosed. We told the cross poster that we would help Rocket if no one stepped forward for him. However as expected, she replied that the shelter would probably be able to locate a rescue for him. 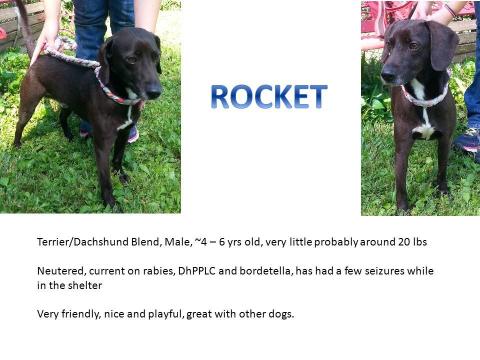 Two weeks went by with no news, and we forgot about Rocket, assuming he was safe. That's when the transport group who was trying to help contacted us again. After much networking, cross posting and emails sent far and wide, Rocket was still at the shelter and his life still at risk. He had been passed up by every rescue and shelter contacted on his behalf, and was now facing euthanasia at any point, as his time in the shelter was up. The information we received:

Male, ~4 – 6 yrs old, very little only about 20 lbs.
(PTS Date: Any day as hold time has expired, can be euthanized for space.)
Rocket was an owner surrender. The owner went to jail and there was no one to take care of Rocket. He is very sweet, friendly, and playful. He does great with other dogs.  The shelter has observed him occasionally have seizures that really need to be checked out.  He is neutered and current on rabies, DHPPLC, and bordetella.

The transport coordinator told us she was doing her best to prevent that tragedy from occurring and pointed out that he was much smaller than he looked in his photos. His size had not even captured our attention when we first responded to the plea for help - but when we took a better look at his profile, it seemed like he was a smaller version of our black hound mix Diego. Like Rocket, Diego is a black, mixed-breed dog who faced euthanasia when he had run out of time and adoption opportunities. An "adoptable" dog is not adoptable if no one wants him.

Rocket had landed in the shelter as a middle-aged dog when his owner went to jail and no one in her family was available to care for him while she was imprisoned. In the shelter, as a non-purebred, black dog, he was easily overlooked. And like many black animals, photographs didn't do him justice when his story, and his photo were networked over the internet- he looked ordinary and much bigger than he really was. As an owner surrendered the dog, there was no hold on him as even a stray animal is allowed, and Rocket faced euthanasia at any time.   When shelter staff observed that he suffered from seizures of unknown cause, his placement prospects dimmed even further.

The transport group who had taken Rocket's case under their wing were determined not to let him go down. They had previously transported an elderly cat to Home for Life - Max, age 9, who had ended up in animal control after his owner passed away and no one in his family could take him in.  So the group was familiar with Home for Life, and in fact, the volunteer who transported Max to us told us that Home for Life was one of the nicest facilities she had ever been to. We couldn't have received a better compliment. We agreed to take on Rocket, and the transport group drove him directly from Illinois to the sanctuary so he didn't have to change cars.

When Rocket arrived at Home for Life, we were surprised at how small he was, barely 20 lbs and how much he resembled our Diego, right down to his soulful hound bark. Described as a dachshund/terrier mix, Rocket seems to be pure hound to us - the lilliputian version. Rocket easily assimilated with the other dogs, and now is part of an eclectic group of older, gentle dogs who live in the front part of our Feline Leukemia building. Rocket's special job is keeping track of Hercules, our resident cat of the Feline Leukemia building dog side-Hercules is their spirited mascot who lives with the dogs because he is both FIV and FELV positive, so must be segregated from our cats who are positive for FIV or positive for leukemia, but not positive for both. Every dog needs a job to do, and Rocket's job is to announce Hercules' every movement with a loud baying bark.

He is so cute that everyone wants to hug him. Still, Rocket is bashful with people, yet easy-going with the other dogs of his group though to our knowledge he was always the only dog in his prior home. He has had some small seizures since coming to Home for Life. Our veterinarians have held off treating him for now since the seizures - idiopathic or of unknown cause - are infrequent and the medications to control seizures have many serious side effects. 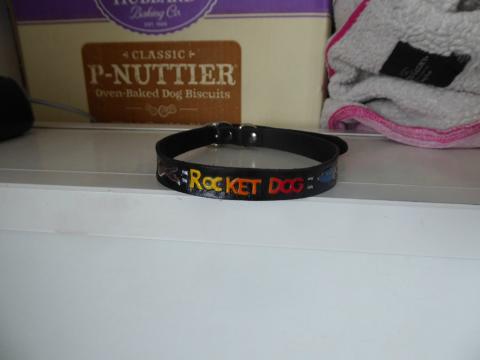 We found an artist who made Rocket a custom collar of his very own. When we sent a photo of Rocket to the artist because he wanted to see the dog he was creating the collar for, he asked if Rocket was a puppy. Rocket is so shy, unassuming, and diminutive, it is easy to mistake him for a much younger dog or even a puppy.  In fact, by age 6, Rocket had survived a lifetime of close calls, losing his longtime home and owner, and becoming unwanted, given up by his owner's family to a shelter, being repeatedly overlooked for rescue and adoption, facing imminent euthanasia and struggling with seizures of unknown cause.

Now safe and cherished at Home for Life, Rocket has been given a second chance to regain a second puppyhood as it were, and to become the joyful, carefree dog he was meant to be.

Rocket was selected by Home for Life volunteer Kim as her partner to certify as a therapy team. After rigorous testing, evaluations and demonstrations over a period of months, Kim and Rocket were certified as a therapy team! 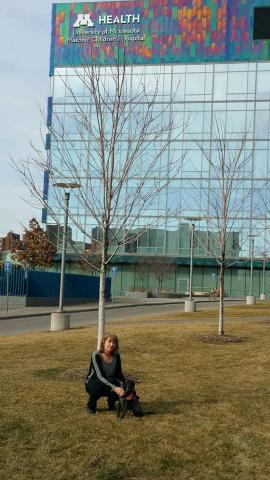 Through Home for Life's Peace Creatures program, Kim and Rocket regularly visit children and adolescents hospitalized at the University of Minnesota Behavioral Health Unit at the hospital's Riverside location, to provide solace and joy to the patients through healing pet therapy. This late Summer, 2016, Kim and Rocket began visiting patients and their families in the surgery waiting area of Amplatz Children's Hospital. Waiting for a procedure or waiting for a loved one undergoing surgery can be incredibly stressful and heart-wrenching; however, the presence of  Peace Creatures therapy team of Rocket and Kim provides a much needed and appreciated interlude from the worry and anxiety. 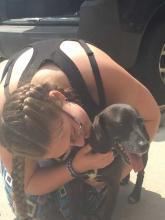 Rocket's transformation has been truly miraculous- from  an unwanted  animal pound refugee, overlooked by shelters and rescues for  adoption to a  happy and confident resident of Home for Life, and with that stability  now a cherished member of a beloved therapy dog team  who gives back and pays it forward to vulnerable children and their families at critical times in their lives. 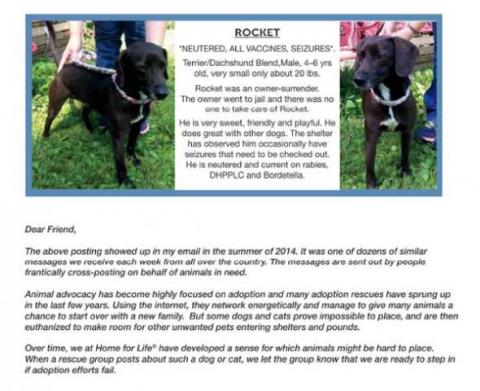 To think of how close Rocket came to losing his life is truly chilling. A dog overlooked because of his looks and medical concerns was saved by Home for Life in the nick of time. But there's more to the story, and that is worth telling - the inspiring transformation of an unwanted, overlooked dog into part of a beloved therapy team, along with HFL volunteer Kim, who bring solace and joy to traumatized children and support to their families.

Rocket's story is just one of the miracles that occur regularly at Home for Life, thanks to your support. We couldn't think of a dog and a story to better demonstrate the incredible difference your contributions make in the lives of our animals as well as so many people.

Thank you for your generous support in 2016 of Home for Life and the transformation you have made possible in the lives of so many animals like Rocket.

To sponsor Rocket or another animal - please click one of the buttons below.