I Hear With My Heart 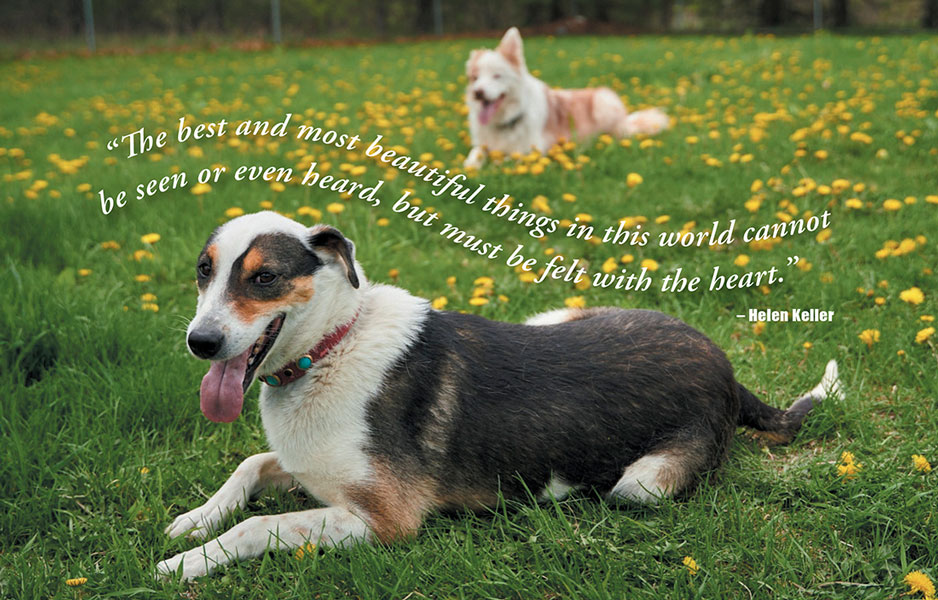 The touching story of Henry and Georgia is featured in Home for Life's® Summer Appeal.
$30,000 Matching Grant!  A deaf dog and former hearing service dog find friendship
and a home for life!

It’s a story that lifts the heart. But you will not see this world exclusive in any newspaper or TV show. These days, news presses in on us from all directions—bad news, confusing news, sad news, stories that cause outrage or kill hope—leaving us shell-shocked and exhausted. This barrage of alerts and updates, vying for our attention 24/7, presents a world in chaos.

But there are other stories going on in the world that are just as real and just as crucial, and perhaps more worthy of our attention. These are the stories that restore our hope by touching our hearts, reminding us that our ability to care is the greatest power we have for repairing the world.

Last year, Home for Life® became the center stage for one such story, when the paths of two beleaguered dogs met at our sanctuary. This is the story of Henry and Georgia, who suffered years of rejection, fear, and isolation before finding acceptance, companionship, and a home together at our sanctuary.

Two of a Kind

This miraculous outcome began in the typical way that a journey starts for dogs and cats who are unwanted in the shelter and rescue system. Shelters and rescues focus their efforts on adoption, fostering, training, food banks, and vet care, all in the name of closing the gaps in the animal welfare system. But all too often the biggest unmet need of all goes unnoticed: the thousands of dogs and cats who circulate in and out of the shelter and rescue system without ever finding a stable permanent home—animals like Henry and Georgia.

HENRY, a purebred border collie, is a blue-eyed ginger. He’s also epileptic and deaf. Originally taken in by border collie rescue, he was placed in a home that turned out to be a disaster. His “family” locked him in a crate where he sat for hours every day in his own urine. He was left isolated and only sporadically fed. His epilepsy also went untreated. When he was finally removed from this cruel situation, his whole belly and chest were bald from urine scald. Thankfully, an incredible young law student in Minneapolis learned of his situation and took charge of him, despite her busy schedule and two other dogs.  She got him the medical care he needed and gave him a loving home. But then she got a job that involved long hours, travel, and a move to Chicago that disrupted Henry’s stability. She tried without success to find a new person to take him in. Henry needed a miracle to have another chance at life, but would he find it?

GEORGIA had a much different start in life than Henry, yet she still wound up circulating through the system, never finding a secure and permanent home.  Georgia is a smooth coat collie mix, aged 6 or 7. She was rescued 4 years ago from a reservation in New Mexico and ended up in a shelter in that state. From there, she was accepted into the training program of International Hearing Dog (IHD), a Colorado nonprofit that trains dogs to help hearing-impaired people navigate the world by alerting them to such occurrences as doorbells, a knock on the door, the phone, and many other auditory cues. Although she is a shy dog, Georgia is also very smart and tries hard at everything she attempts. It was no surprise that she did well in IHD’s 8-month-long comprehensive training program to become a certified hearing dog.

Upon successfully completing her training, Georgia was placed out of state with a hearing-impaired man and his son. They lived in a basement apartment within a house. Georgia performed her hearing work well, and the man and his son bonded with her. However, she became increasingly reactive to people visiting their apartment. Her family felt she was “aggressive” to their guests. She started barking at sounds and soon the man’s landlord complained. This behavior was unlike anything IHD had seen from Georgia during her time in their program, and it was causing great stress for the man she was there to help. So, Georgia returned to the IHD facility where she was re-evaluated. IHD assessed that her posturing was due to a lack of confidence and lack of understanding about what she “should be doing.” Since a hearing dog’s role is a demanding one, IHD determined Georgia would fare better as a pet companion where she would face fewer expectations.

IHD next adopted Georgia to a family (father, mother, son, and daughter). They were, of course, candid with the family about Georgia’s shyness and aggressive posturing when she felt threatened. Again, Georgia bonded with the family but later became protective. The family worked with an animal behaviorist but eventually decided to throw in the towel and returned Georgia to IHD.
The staff at IHD were saddened by all Georgia had been through. They contacted Home for Life with a letter, saying:

“Georgia is a very sweet girl. We feel that we have served her poorly by putting her repeatedly into situations that were not aligned with her nature. When given permission to be herself and the space to simply choose not to engage in a situation, she is loving and happy and even playful. We do not know what happened during the first three years of Georgia’s life on the Reservation, but she was a timid and scared girl when we first met her. We have thought about and discussed what is best for Georgia and tried to explore all her options. We have come to the decision that a sanctuary lifestyle without the demands and expectations of a typical companion pet will allow her the best option to live a quality life with a sense of security and contentment.”

The director of IHD, herself, wrote of Georgia: “Our brave girl, who tries so hard, is a sweet dog, but her fear and anxiety are profound. I have so much I would love to share with you about her. I have worked with dogs for three decades. Never have I seen a dog so in need of a forever home—a home for life.”

How to Save Them All

Animals carry the psychological scars of their past. It is hard enough to reassure any traumatized animal who has been through so much, let alone one like Henry who cannot hear. It is difficult to engage the trust of a dog like Georgia who has become hypersensitive to noises, and who is on edge in this world. Yet even the most timid or dejected dog or cat can still find a way to trust and feel loved again. With their heightened perception and sensitivity, animals navigate the world. Animals don’t comprehend or care about mission statements or strategic plans, but surely understand authenticity and discern without fail when they are cherished and safe.

Our hearts went out to these two beautiful dogs who had suffered neglect, fear, loneliness, and repeated rejection—two dogs with the same desperate struggle to find a place to belong. Their individual journeys took them through breed rescue, animal shelters, rehabilitation, specialized training, foster homes, and multiple placements. Yet they remained at risk.

Home for Life® was established to welcome animals like Henry and Georgia, and so many other cats and dogs who fail to find or keep homes. The plight of these dogs and cats has continued to confound the animal welfare world charged with helping them. Home for Life® has an innovative solution to help these special animals—a new idea that we call “the 3rd Door”—the care-for-life sanctuary, where their hearts can heal.

Henry and Georgia have been given a new start and a new life at our sanctuary, where they have found acceptance, loving care, stability, and friendship.

Henry had been at Home for Life® for about two months at the time Georgia arrived. He came to our sanctuary shy and reticent, not ready to engage with other dogs.  He settled in, but had not found any canine pals yet.

When we agreed to accept Georgia at the sanctuary, we never thought that she might be a possible friend for Henry. But, she was a herding breed, like him, and of similar age. Henry also seemed perfect for Georgia.  She had become sensitive to noise and, being deaf, Henry was not a barker. In time, a bond began to form between them. They developed an understanding and partnership. Georgia expresses affection for Henry by touching noses with him and shouldering him in a comradely fashion when they run in the fields together.

To see Henry and Georgia so happy together at last after all they have been through feels like a miracle.  Their bond transcends their challenging pasts, and even Henry’s disability. 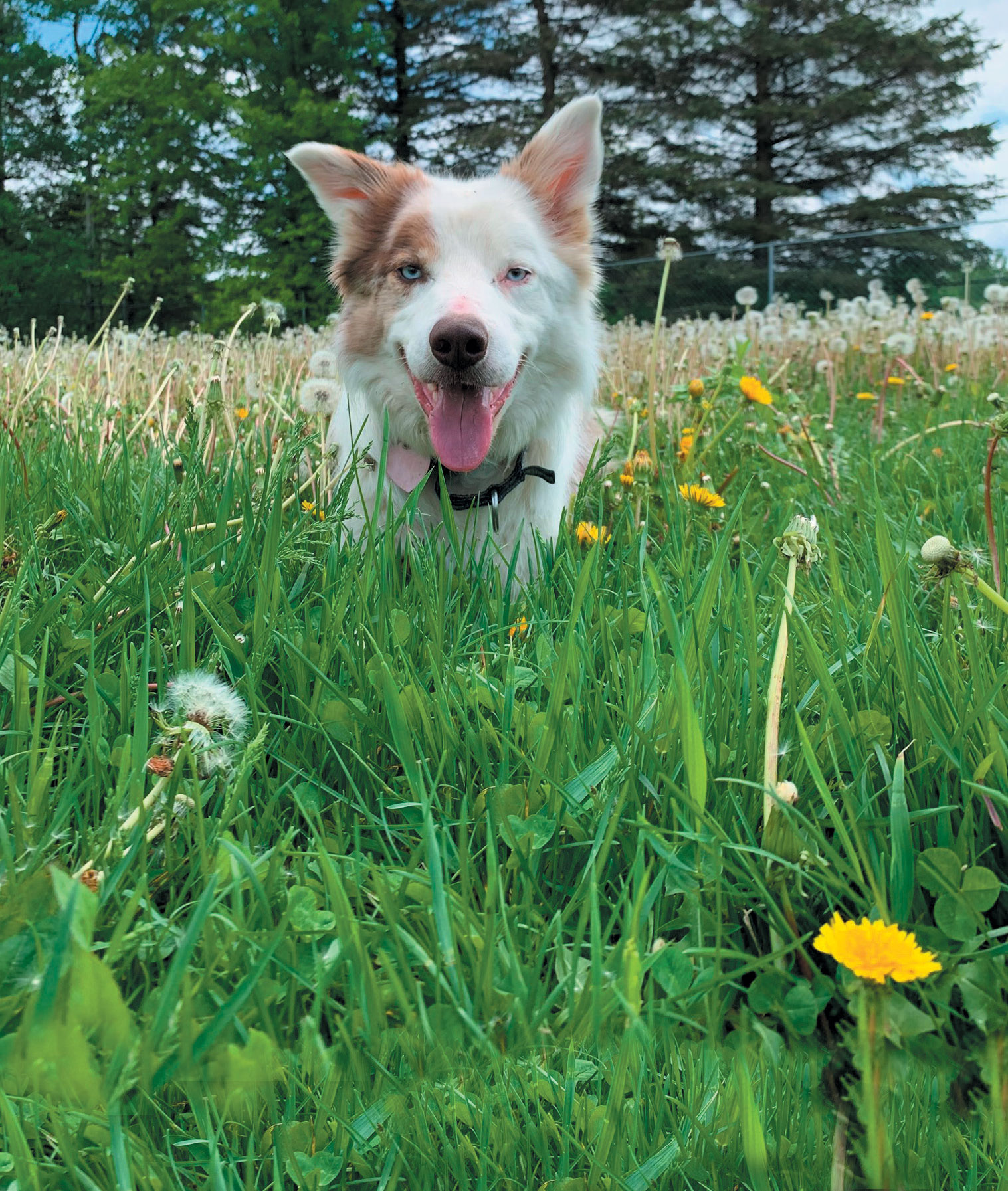 Hearing with the Heart

It seems like a miracle that the two dogs who came to Home for Life® have been so happy, after all they have been through and all the options tried for them. But when all else is gone or wrecked, these dogs can still hear with their hearts.

Our ability to help dogs like Henry and Georgia is not a result of luck. All that we accomplish starts with the belief that led to the founding of Home for Life® 23 years ago: animals who need us are not a problem to be solved, but an untapped treasure. We believe in the significance of every life we care for, and that the life of each cat and dog counts.

That perspective is transformative, a premise that creates miracles—from establishing and taking new ground for the most vulnerable cats and dogs, to creating a safer world for all animals by showing what’s possible, to reaching out to the community through our animals who serve as ambassadors for our mission and conviction that all life is valuable. As a supporter said to me in an email message, “Home for Life® is a sanctuary for us too because you show that there is still kindness and compassion in the world.”

And we show that miracles are still possible. Henry, the deaf dog, isolated in his own world, who must have been lonely and lost after his odyssey through rescues and placements, now has his very own friend and hearing service dog in Georgia. Henry who really didn’t like other dogs, found a steadfast companion in Georgia, and she found a job and outlet for all her hard work and training.  Hearing with the heart made the miracle possible—a miracle that could have only happened at Home for Life.®

Heartfelt stories like Henry and Georgia’s are ones you, our supporters, have made possible and continue to help us create at Home for Life.® They are the stories and the miraculous outcomes that resonate with us, and that lift our hearts in these challenging times. We all need more good news and stories we can hear with our hearts.