Carbon, at the Soi Dog Foundation in Thailand.

Carbon was named for the steel grey color of fur. He was a stray street dog, found in Bangkok, Thailand, believed to be about three years old. 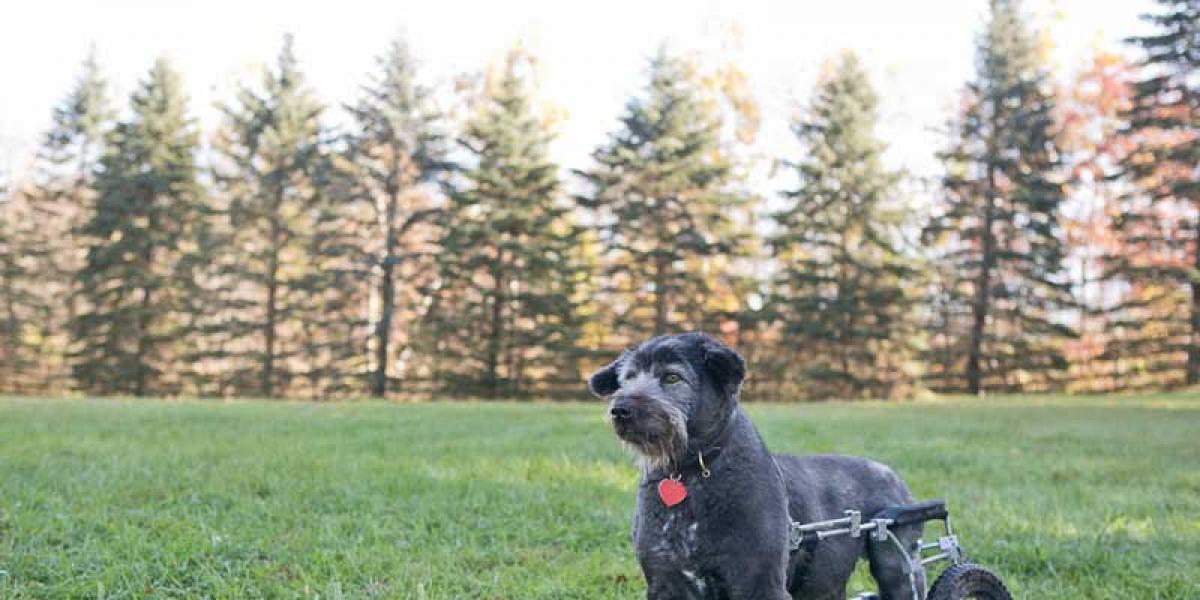 He came to Home for Life from the great Soi Dog Foundation, a shelter based in Thailand. Soi Dog Foundation is on the front lines saving so many dogs destined for the dog meat trade, intercepting many transports, and then sheltering and providing medical care and rehabilitation to these rescues at their facilities in Bangkok and Phuket. Home for Life has helped Soi Dog with many of their most vulnerable rescued dogs who had little prospect of finding an adoptive home, notably many of their paraplegic dogs, like Goofy and Program.  Because they do so much to help so many at risk dogs, Home for Life always tries to support Soi Dog if they request our help with one of their dogs in need.

One thing our supporters should know is that Soi Dog pays all costs associated with getting the dogs to Home for Life: airfare, veterinary exams to certify the animal is healthy enough to fly and so on. Generally the dogs have flown into Chicago from Bangkok, and then transport teams drive them the rest of the way to Home for Life.

Carbon is paraplegic and is believed to have been hit by a car. The injury left him very disabled, and completely unable to use his back legs at all. In addition, when he arrived at Home for Life, Carbon didn't have much strength in his front legs either and wanted to lean to the right persistently. While in Thailand, Carbon lived at the Bangkok shelter and was mostly caged for his own safety and to help keep him clean.  Dedicated Soi Dog volunteers helped get him out of the cage daily, and Carbon became a real favorite among them, with many loyal fans who continue to follow his progress now that he is at Home for Life.

Because of neurological damage he suffered in the accident and possibly from lack of conditioning from being caged, we found that Carbon has very little mobility even when compared to our other paraplegics. He arrived in the early winter of 2015, and immediately won our hearts with his lovable personality, and shaggy-dog good looks. Carbon is an introverted dog, quiet but sweet and he responds gratefully to any attention shown to him. Because he is shy but social, and because he was found to be quite vulnerable with his extensive disability, we decided to have him live in our dog building's main entrance. He lives with some of our other gentle dogs: Sabra and Evie among them. There he watches the daily activity from the big windows of the front door, and he is very  accessible to our staff for the frequent care he requires. Perhaps because he felt so vulnerable first as a street dog, then as an injured and disabled street dog, Carbon is not big on becoming friends with other animals, but is very receptive to any attention from people.

Shortly after Carbon arrived at Home for Life, we bought him his own custom made cart. Carbon was not thrilled with his cart at first, and would get tired quickly while in it. He spent short periods of time in the cart initially, so he could build muscle strength in his front end and support his weight. Even our paraplegics who like their carts and are accustomed to using them still are on a schedule through out the day. The daily routine has staff putting them  in the carts, the diapers checked and changed, then out of the carts on a two hour rotation. It is very tiring for the dog to have all his weight supported on the front end so they appreciated taking a break throughout the day. Initially, Carbon could not even bear his weight while in the cart, and would cry until we took him out, but now after several months, he has built his muscles up and can support himself in the cart and even walk if led on a leash and encouraged. When out of the cart, Carbon has a great preference for laying on his right side only, probably due to neurological damage he suffered from the car accident, so it is especially important for him to spend time in his cart daily, to help his body adapt to a straightened and  more natural position, and get his weight off the one side.

We also took Carbon swimming this summer at the Apple River, a new experience for him and plan to  help him continue to build his strength with hydrotherapy - a great way to help disabled dogs rehabilitate as they are buoyant and weightless  in the water and can work on regaining muscle strength in a safe way. Besides, it's a great way to cool off  during our hot summers for dogs and our staff!

It is so heartbreaking to see the photos of the desperate dogs destined for the dog meat festivals, and as people who love animals,  it is easy to feel helpless in the face of this great suffering. Thanks to our donors, Home for Life, thousands of miles away,  is able to support Soi Dog's advocacy and tireless work on behalf of the dogs who have been rescued from the  meat trade, by sheltering and caring for some of their most vulnerable animals like Carbon.

To sponsor Carbon, click on one of the links below.