Sandy is a handsome shepherd mix who came to Home for Life five years ago from the Nevada Humane Society, a well known no kill shelter near Reno, Nevada. Sandy was trapped by the Humane Society on a Pueblo Indian reservation as a young stray dog. He is tall and athletic and has beautiful golden short fur with eyes of the same color, and looks like a dog that would have come from the desert in the Southwestern United States. 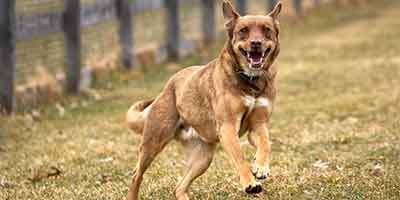 No one at the Nevada Humane Society knew much about Sandy's background but he was very tentative around people and especially those he was unfamiliar with. It can be assumed that he had lived his entire life like many dogs on reservations, stray, not really owned by anyone, and trying to survive as best he could on scraps, and handouts. Dogs like Sandy learn to be wary by observation and experience, and from their mothers as puppies, and this tentativeness which kept them safe in a sometimes threatening environment, can be difficult for some dogs to overcome. Sandy was offered for adoption by Nevada with no interest. He was then enrolled in a prison program, where younger dogs live at a facility and are cared for and trained by the inmates. Unfortunately, Sandy didn't do well in this environment and was very timid of the male inmates, even attempting to nip a couple of them as they tried to work with him. Sandy was returned to the Nevada Humane Society, who were at a loss as to what to do to help him as they didn't feel he was able to be adopted. Home for Life was approached about helping Sandy during the tenure of Executive Director Bonney Brown when Nevada had a tremendous record of saving the lives of the thousands of animals they admitted each year. With a save rate of well over 90% of dogs, cats and other animals they help, Nevada was undoubtedly the best place Sandy could have landed but all the avenues they had tried for him had not worked, and they were reluctantly considering euthanasia.

One of the Nevada administrative staff stepped up to try to find another solution for Sandy. She thought he was such a beautiful dog, and had never really had a chance to live a peaceful, happy life. It didn't look like he would be a candidate for adoption, but she hoped the alternative of a sanctuary would be an option for him. Nevada offered a small donation to help care for Sandy and found a donor to pay for his transport to Minneapolis, 45 minutes from Home for Life. 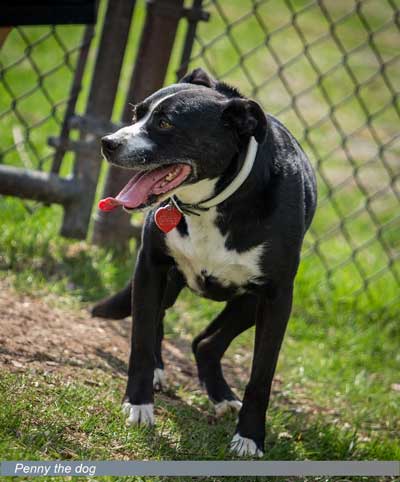 Sandy is a solid citizen of Home for Life, and is relieved and happy to be at a place where uncertainty will never be part of his life again - either where he will get his next meal and how he will survive, or what his future will be and where he will end up as a ward of a shelter. He is a tall and strong dog, but is kind hearted and has been especially reliable and gentle as a companion with some of the difficult female dogs of the sanctuary. His first roommate and friend was a disabled pitbull named Penny (pictured adjacent right), who was older by about 4 years than he. Although Penny could be dog aggressive, she was vulnerable because of her disability (she had suffered a broken back in a prior home). We paired her with Sandy whom we knew wouldn't hurt her but who would stand up for himself if Penny tried anything. Sandy was always steadfast with Penny, and was a great friend to her even after her diagnosis of cancer. 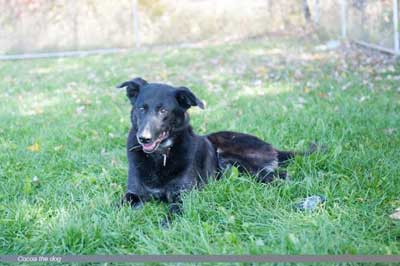 After Penny passed away, Sandy's companion was a too smart for her own good collie mix by the name of Cocoa (pictured adjacent left) who liked to stir up trouble and pick fights with groups of dogs. As an instigator and troublemaker, we found Cocoa did the best with one other dog instead of a pack. Again Sandy was a perfect match and lived peacefully with Cocoa for 3 years. She too was older than Sandy. When Cocoa developed brain cancer, Sandy was loyal and gentle with her, despite being much stronger and preferring to be more active. He would instead stay close to Cocoa, resting on a hammock near the chair where she liked to sleep. 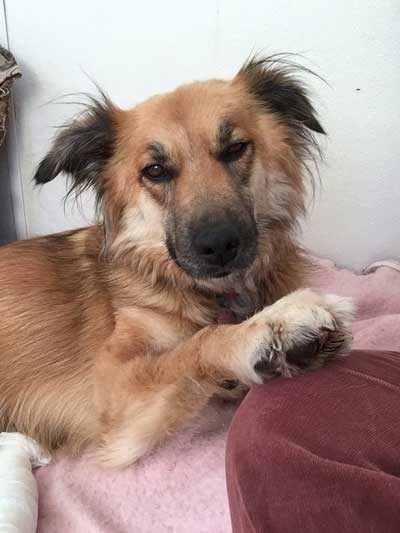 Sandy's current girlfriend is the beautiful Yasmin (pictured adjacent left, and at right with Sandy, and in the video at the end of the profile), now about age 4, one of our dogs from the Vafa Animal Shelter of Iran. Although Yasmin came to Home for Life because she is a paraplegic, she doesn't let her disability stand in the way of her assertiveness with other dogs, and until a few months ago, could be very defensive with people as well. She was found injured along the roadside in Iran and taken to the Vafa Shelter. Half her tail is missing, presumably cut off before she reached the safety and care of Vafa. She was terrified of scissors and would try to bite us if we used them to remove the wraps on her legs or her diapers - a scissors was probably what was used to cut the lower half of her tail off. She has gone though a lot in her young life and will react defensively, a strategy she learned after her injuries, and then trying to survive when disabled among the nearly 600 other dogs of Vafa. 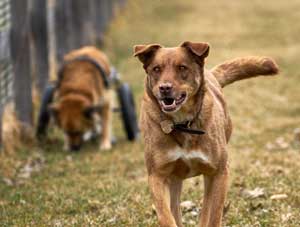 We actually had quite a bit of difficulty finding a suitable arrangement for Yasmin because she was so bossy and aggressive with other dogs, even bullying our Shar Pei mix Lance. Ever the gentleman, Lance never retaliated against Yasmin, although he could have easily defeated her in battle if he chose with his superior strength. Still it wasn't fair to Lance to make him endure this aggression from Yasmin, so we moved her yet again, this time to her own townhouse where she was compelled to live alone because of her refusal to get along with our other dogs.

We thought for her own safety and to keep the peace with our other dogs, she would have to live alone forever. At first Yasmin enjoyed having her very own townhouse. But after a few months, she became obviously lonely and bored. We tried matching her up with Shoja another dog from Vafa, but they did nothing but bark and snarl at each others, and our staff did not like the idea of breaking up a fight between the two of them. Other pairings were tried and Yasmin haughtily and aggressively rejected all options. Then, Cocoa died. 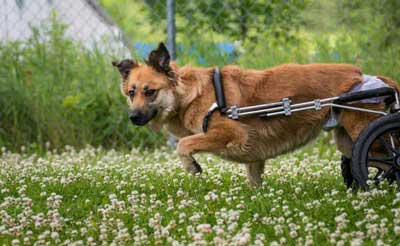 A few days later, remarking on how lonely Sandy was ... and how lonely Yasmin appeared, we thought of trying them together. It worked! Yasmin loved Sandy, and had at last found a companion she could live with in peace, one who would not take advantage of her disability, but who would stand his ground and defend himself if she menaced him. But Yasmin has no thought of doing anything but playing with her new found friend who can match her in intensity and energy. And Sandy has a younger girlfriend at last after 5 years of older women! It is one of the miracles of a sanctuary like Home for Life. Two forlorn and discarded dogs like Sandy and Yasmin, who came from such different backgrounds - one a stray from a Nevada Indian reservation and the other, a paralyzed and abused dog in a wheelchair from a shelter in Iran - have found safety and more importantly friendship at Home for Life.