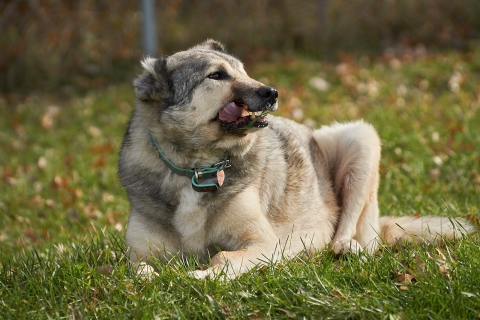 Raha was born a street dog in Iran, and he had encountered cruelty before. In fact, his ears had been cut off in a prior incident. He was an older fellow at the time of this latest attack (our veterinarians estimated him to be about age 8). It hardly seemed possible that this lonely, aged street dog from a developing nation could have a future after life had treated him so harshly. But as it turned out, fate had a plan for Raha.

Disfigured and starving, he wandered around for two weeks. Finally, townspeople who had witnessed the attack called the Vafa Animal Shelter for help, and representatives came to his rescue. Vafa took Raha in, but they knew he would need more medical care and ongoing support than they could provide. He was horribly malnourished and he had developed an infection because of his injuries. Vafa reached out to Home for Life® to help with his case. 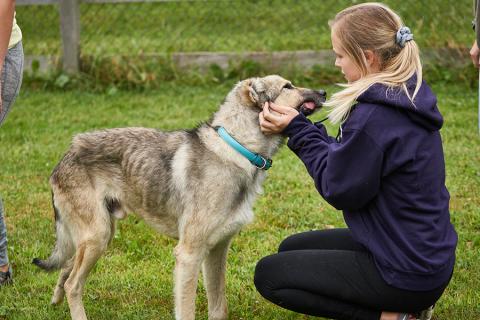 Hannah with Raha giving him a hug

Raha arrived at Home for Life® emaciated, weak, and in pain from his injuries. He had traveled halfway around the world from Iran to reach our Midwest sanctuary!

Raha made the long journey from Iran to Amsterdam, Toronto and finally to Home for Life’s® sanctuary in the Midwest, where at last he could receive the complex medical care and extensive rehabilitation needed to restore him to health and happiness.

There is no excuse nor explanation for the evil Raha suffered, but there is an answer to those who hurt him, tried to ruin his life and kill him, and for anyone who has been cruel to a defenseless animal. And that is the rest of Raha’s story, his real story.

Our Emergency Medical Care Fund was established for animals like Raha who need extraordinary veterinary care. Thanks to the generosity of many compassionate donors, we were able to get Raha the help he needed.

Veterinarians at the University of Minnesota treated the terrible infection in his face and mouth resulting from his injuries. Next they cleared away the extensive scar tissue so he could open his mouth. Sadly, one eye and several teeth were damaged beyond repair and had to be removed. Raha was fed a special liquid diet for weeks until he regained weight and strength. His recovery took nearly 6 months, but at last his energy returned, along with his interest in life around him! 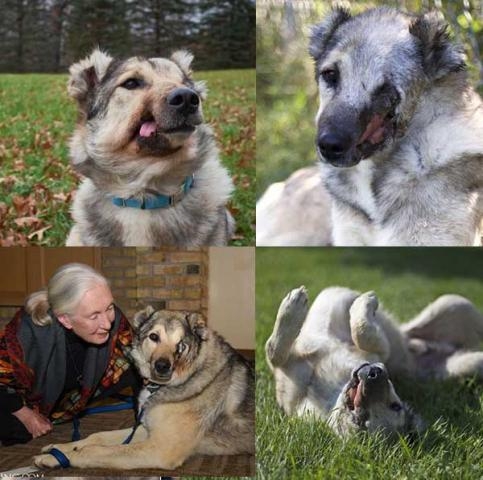 Raha's rescue story touched the hearts of people all over the world. They were moved by his spirit, and also shaken by the thought that anyone could be so sadistic toward a good dog.

What happened to Raha will always be visible. His disfigurement bears witness to the sickest tendencies of human nature. Yet his enduring trust and gentleness demonstrate that compassion and kindness prevail. 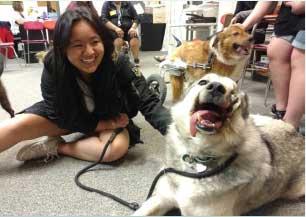 Home for Life® responded to the senseless cruelty Raha suffered by ensuring the recovery of this humble dog whose name means “free and peaceful” in Persian. Even after all he endured, Raha is a kind dog. The same trusting heart that made him an easy target for cruelty has also inspired compassion and protection from caring strangers who were moved by his courage and resilience. We were determined to help him heal and give him a life of purpose and joy. With our supporters’ generous help we have succeeded!

Our sanctuary is the first true home Raha has ever known. Here he has found stability, friendship, comfort, and so much more—an opportunity to touch the lives of countless people with his story and through his example.

Raha’s story, written all over his face, tells the tale of good overcoming evil.

Raha has become an ambassador of compassion and peace. As the newest member of Home for Life’s Peace Creatures® therapy dog corps, he brings hope to people battling adversity: patients in hospitals and mental health wards; families in battered women’s shelters; wounded veterans; and students at area high schools.

As part of the Home for Life community, Raha is helping to bring positive change to the world every day. He touches people through his therapy work and through his own life story. His story has even touched the heart of Dr. Jane Goodall, who met him when she was the special guest speaker at our Spring 2018 Gala. Dr. Goodall was heartened to see how far Raha had come and commented that his story must bring hope to shelter workers around the world who are dealing with neglect and abuse cases every day on a scale that is hard to imagine here in the U.S. 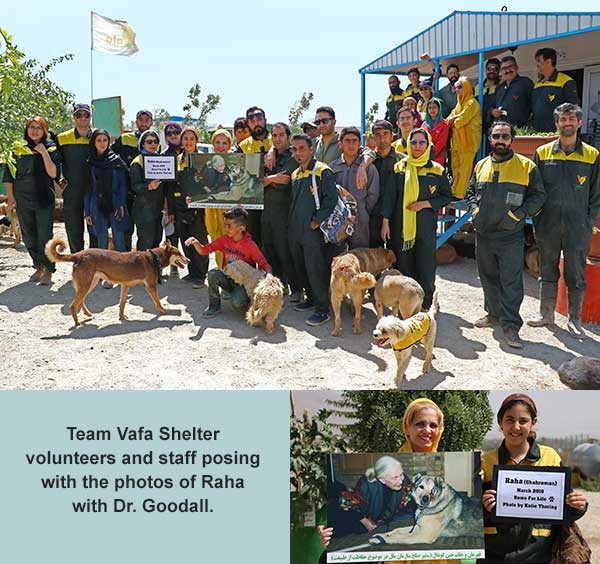 We sent photos of Raha and Dr. Goodall to the Vafa Shelter, whose workers had first stepped in to save the dog’s life. Vafa’s staff and volunteers were thrilled to see Raha healthy and happy at last. His life journey had taken a direction that none of them could have predicted when they first rescued him. Vafa sent us these photos of their volunteers and staff posing with the photos we had sent!

The pictures express, better than words can, the bond we share with those who love animals no matter where in the world they live, a bond that transcends political ideology and other divides. Raha’s story urges us to seek the common ground we share with others, something to think about after this tumultuous year, and as we move into 2019.

Animal sanctuaries are needed everywhere as worldwide interest in Home for Life® attests. Home for Life’s mission and services give hope to animal welfare workers in other countries who face enormous challenges in their efforts to protect animals and provide humane care.

As a care for life sanctuary, Home for Life® supports the work of animal welfare activists in the U.S. and in other countries by helping them with the most desperate cases. To extend this aid restores the faith of brave individuals on the front lines and brings a ray of light to the often bleak circumstances and uphill battle they face.

At Home for Life®, we envision a world in which the most vulnerable animals like Raha can reach their full potential. His story shows that it is possible to make the best of a terrible start in life. He is a living example of goodness triumphing over cruelty. Raha has survived to enjoy a full life and even give back as part of Peace Creatures® community outreach programs.

More animals need the life-saving dream that only Home for Lif®e can provide. This holiday season, with a $25,000 match challenge at stake, now is the time to make a dream come true for another dog or cat like Raha who might not have that chance without your support.

Thank you for all the dreams you have made come true for Raha and all the animals at Home for Life® in 2018. Think of all the animals we can continue to reach in 2019 with your help, and please make your most generous gift this holiday season.